At Work & In The Field 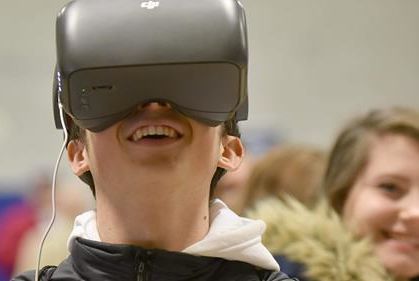 WEST BARNSTABLE — Students from Cape Cod and the Islands who attended a career showcase Tuesday at Cape Cod Community College learned that widening their horizons could mean taking a job in the region’s water-based “Blue Economy.”

“This is a very important, special day for me,” said Liv Eldridge, a senior at Barnstable High School who has been accepted to Eckerd College in Florida and Hawaii Pacific University.

Talking to people from Woods Hole Oceanographic Institution was inspiring, said Eldridge, who said she’s wanted to be a marine biologist since watching “Dolphin Tale” in fourth grade.

“If I ever want to come back here after college, I have opportunities,” Eldridge said.

“What we’re trying to do is reach out to kids in the region and help them understand the Blue Economy that surrounds them,” said Christopher Adams, chief of staff at the chamber.

The goal is to make contact with a range of young people, from students entering the workforce directly after high school to those going on to get college and graduate degrees, Adams said.

Hydroid Inc. in Pocasset, the ocean exploration company that helped locate the Air France Flight 447 wreckage after the plane went down in the Atlantic Ocean during a flight between Brazil and France, is looking to hire engineers, while representatives from the Woods Hole, Martha’s Vineyard and Nantucket Steamship Authority advised students to get their Coast Guard seamen certification to apply for certain summer jobs.

Members of the Massachusetts Aquaculture Association told students they also were looking for summer help, while representatives of Massachusetts Maritime Academy in Buzzards Bay seemed to convince Barnstable High School student Michael Hardy that its students found good jobs right out of college.

Workplaces are “going to want to hire you,” Hardy said.

Nick Muto, of Chatham, chairman of the Cape Cod Commercial Fishermen’s Alliance, had students who expressed interest in fishing careers leave their names and phone numbers.

People who show up with a strong back and strong work ethic will be rewarded, Muto said. He said he would have started fishing 10 years earlier than he did if he’d known more about it when he was younger.

Lukas Smith, of DieselSmith in Dennis Port, which sells marine diesel engines, wowed the students with a boat stabilizer from Seakeeper.

When students holding the gyro tried to wriggle their arms to mimic ocean swells, the device fought back, successfully, and kept them from moving.

Mary Newton Lima of the Coonamessett Farm Foundation displayed a video of what a turtle tagged with a camera saw in its underwater swim — think “Finding Nemo” — and showed students a scallop dredge angled to deflect turtles instead of inadvertently catching them.

“Today is really showing the students the opportunities that are here on Cape Cod,” said Joanne Jarzobski, a marine biology teacher at Barnstable High School who also is a naturalist on a whale watch boat.

“This is the first time they’ve been exposed to the water-based side of our economy,” Adams said, noting that another career showcase for students on the Cape features the construction trades.

Interest in marine biology and the maritime history of the region is increasing among students as high schools add courses in those subject area.

Barnstable High School students can take marine biology and also a course on whales and a course on sharks with Jarzobski, while Martha’s Vineyard Regional High School offers a maritime studies program.

“Preserving the ocean is probably the most important thing we should be looking at now,” said Graham Hempstead, a junior at Barnstable High School.