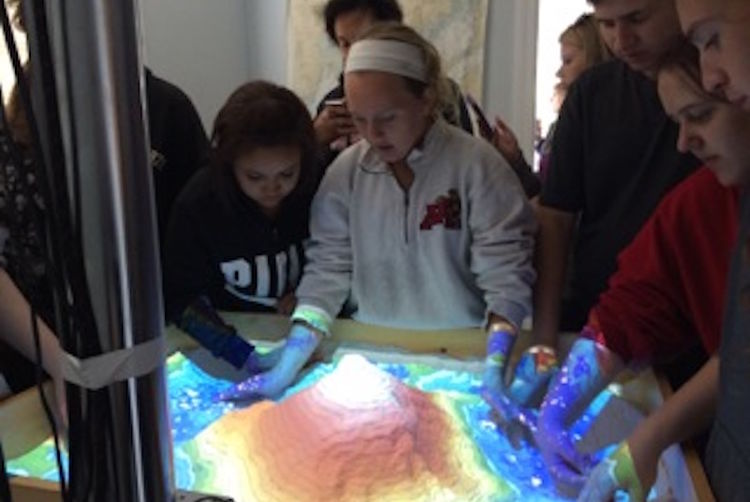 Would you believe there is a sandbox on Cape Cod that is provoking unbounded enthusiasm and non-stop inquiry—from middle and high school students?

“Everyone thinks it’s the coolest thing they have ever seen,” said one teacher who brought the sandbox into her classroom. “Once I got it all set up, the students—and a lot of the staff—at our school kept me so busy answering their questions that I got nothing done for the rest of the week.”

The Augmented Reality Sandbox is a portable version of the virtual reality system used in the Ocean Science and Technology Program at Zephyr Education Foundation (ZEF) in Woods Hole. It allows students to create virtual landscapes—including coastlines similar to ours here on Cape Cod—to study how changing conditions reshape them.

What makes the sandbox so engaging is that it allows students to watch how events and their impacts unfold, all at an accelerated pace. For example, students can see how a rushing river creates erosion—a process that would take years to observe in real time—in just a few minutes.

Now, thanks to a Woods Hole Sea Grant, ZEF is making the AR Sandbox available to middle and high schools on the Cape for a week at a time, at no charge. They help set up the system in your classroom and train teachers in its use.

The system doesn’t take up much space, though it does actually involve sand. It consists of a 30-by-40-inch sandbox, an Xbox camera, and a computer and projector.

A topographic map, in color, with contour lines, is projected onto the sand and is updated as students construct different topographies. Virtual flowing water can be added to see processes such as drainage, flooding and coastal systems.

ZEF has several lesson plans to share with teachers, and they’re also establishing a community of users to share plans developed by Cape Cod teachers. Teachers who have worked with the Sandbox say it helps students work in teams, “not in a competitive way, but through working towards a common goal.”

We think the AR Sandbox is a great way to and learn about topographic maps, watersheds, the water cycle, and coastal processes such as waves, sea level rise, and storm surges.

We are just as impressed by how the system supports students in asking questions and justifying their ideas—practices emphasized in the Massachusetts Science and Technology/Engineering Standards.

More about the Augmented Reality Sandbox: The system was developed at UC Davis by a team led by Oliver Kreylos. Since then, ZEF has built systems for local schools and nonprofit educational organizations.

Zephyr Education Foundation offers an Ocean Science & Technology Program in which classes come to Woods Hole for the day to participate in a hands-on oceanographic cruise and tour some of the lab facilities. Information regarding the field trip can be found at www.zephyrmarine.org.