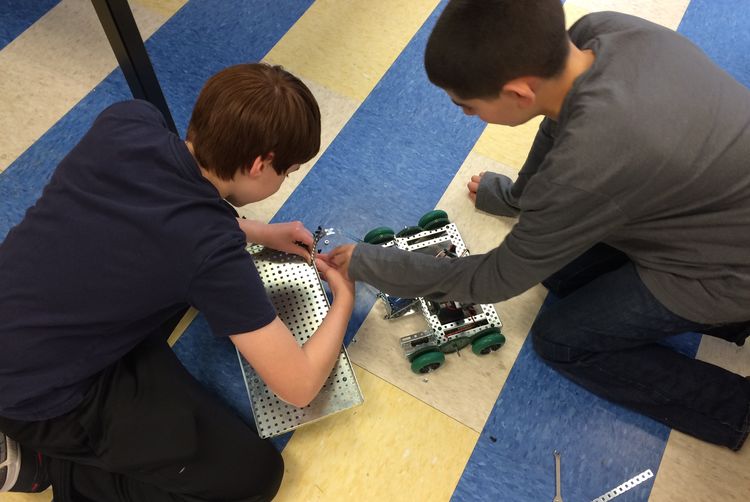 Ginger Lavelle is used to working with students who are eager to figure out how things work. She teaches 7th-grade Engineering at Sandwich STEM Academy.

She also leads the after-school Robotics Club there.

But this year, the work her students did surprised her.

What made this year’s experience different—both in terms of complexity and accomplishment—for her students?

The difference began with a seemingly simple addition to the Club’s resources: a robotic arm known as a Clawbot, which Ms. Lavelle got with a grant from the Cape Cod Regional STEM Network.

“There is a lot of buzz around robotics, these days,” she said, “but it’s primarily focused on building ROVs.”

We know about that buzz. We are definitely excited about the special opportunities students on Cape Cod have to get an introduction to robotics by learning to build ROVs. These remotely-operated vehicles are, after all, the kind used to support research of the ocean and ocean floor.

“The starting point with the Clawbot is different,” Ms. Lavelle explained, the challenges and opportunities much more open-ended. Students first had to imagine a range of problems and how a robotic arm might solve them.

Maybe that’s why the Clawbot captured the interest of a wide range of students, appealing to more girls than some ROV projects have, and also attracting students who are interested in biomedical engineering.

Next, to make progress on their ideas, students had to integrate mechanical engineering and computer programming in ways that were new to them.

They worked in teams, using the VEX Robotics® platform and a program called Robot C to design, build, and program their Clawbots. When the teams competed to show off how well their robots could carry out specified tasks within a fixed time, Ms. Lavelle was amazed by the results.

Beyond the fact that students came up with some novel robotics—check out the Resources section above for a video of a clawbot in action—it was exciting to see how the Clawbot projects engaged students across disciplines from imaginative design through analytical mathematics.

Ms. Lavelle has all students complete an engineering notebook as they work. This is a place for reviewing ideas and tracking decisions that are made based on what’s being learned along the way.

While the notebook work is individual, it supports interaction. That’s because being able to describe the process through detailed notes and computations prepares students to communicate about it—a process that mirrors the work of engineers in the field.

But the real-world experience students liked best came at the end: the chance to put their projects to the test and have their clawbots judged on what they could do.

Their enthusiasm as they demonstrated their work at the Sandwich School Committee meeting was inspiring. And not just to us adults.

Students in Sandwich are excited about engineering and robotics, and clearly ready for more—at school and in their careers.